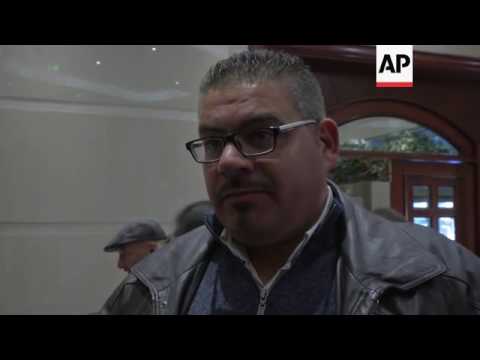 AP TELEVISION – AP CLIENTS ONLY
Beirut – 8 December 2015
1. Child having his ID picture taken
2. Child stepping off chair
3. Woman in front of screen getting ready to have her picture taken
4. Woman having her ID picture taken
5. Refugees lining up for registration with the Canadian authorities
6. Man filling out a form
7. Close up of form.
8. SOUNDBITE (Arabic) Antoine Wared, from Aleppo:
“You know what it’s like in our country, in Syria, I don’t have a home, I lost everything there. I’m looking for a new life for my children and me.”
9. Wared’s daughter at desk
10. Family in registration line
11. SOUNDBITE (Arabic) Antoine Wared, from Aleppo:
“God willing, it will be safe there and we will find a better future for my children. We don’t know when the war will be over.”
12. Family at the next counter, getting ready to have their pictures taken
13. Close of badge on Canadian military uniform
14. SOUNDBITE (English) Lieutenant Colonel Patrice Beauchamp, Joint Task Force Commander:
“Within the Canadian Armed Forces we have people that speak the language and they were deployed in order to be integrated into what they are doing in their functions – like here we have some soldiers who are doing biometrics that are speaking Arabic.”
15. Woman and her children waiting in line
16. Close of baby in buggy
17. Various of elderly refugee being wheeled through processing centre
18. Close of Canadian flag
19. SOUNDBITE (English) Oscar Jacobs, IRCC (Canadian Immigration Services) Operation Centre Manager, Beirut: ++STARTS ON PREVIOUS SHOT++
“We’ll verify that everything is interview-ready for the applicant. That means making sure that all of the forms are there, that all original documents have been scanned, that the biometrics have been done.”
20. Canadian immigration staff
21. SOUNDBITE (English) Michelle Cameron, Canadian ambassador to Lebanon:
“What Canada has recognised in this 25 thousand commitment is that the situation is degrading for the refugees in each of the three different countries. So we’ve taken, we’ve looked at it as more of a humanitarian effort, a solid humanitarian effort and made sure that some of the criteria that we used to look at such as language criteria, well we still look at, we also know that we can give great support back in Canada.”
22. Various of children in room waiting for their parents, colouring-in books
STORYLINE:
Canada was processing the resettlement applications of Syrian refugees in Lebanon for a second day on Tuesday.
The process, which started on Monday, has seen so far an average of 300 to 400 refugees per day including sponsored applications and UNHCR registered refugees passing through.
Under the programme, the UN refugee agency is selecting 25 thousand refugees for resettlement in Canada, from the millions living in Jordan, Lebanon and Turkey.
Around 150 people are taking part in the operation in Lebanon, according to the Canadian ambassador Michelle Cameron, including Canadian Armed Forces personnel, embassy staff, members of the Department of National Defence, the Canadian Immigration services (IRCC) as well as IOM (International Organisation for Migration) personnel and the Danish Refugee Council (DRC).
Refugees are told to bring along proof of ID and their photos are taken as well, along with biometric information such as eye scans and fingerprints.
Following this initial stage, they then undergo medical check conducted by Canadian medics.
Canada’s commitment reflects the election of Justin Trudeau as prime minister in October’s election and the change of government there.
Former conservative prime minister, Stephen Harper had declined to resettle more Syrian refugees.
Clients are reminded: