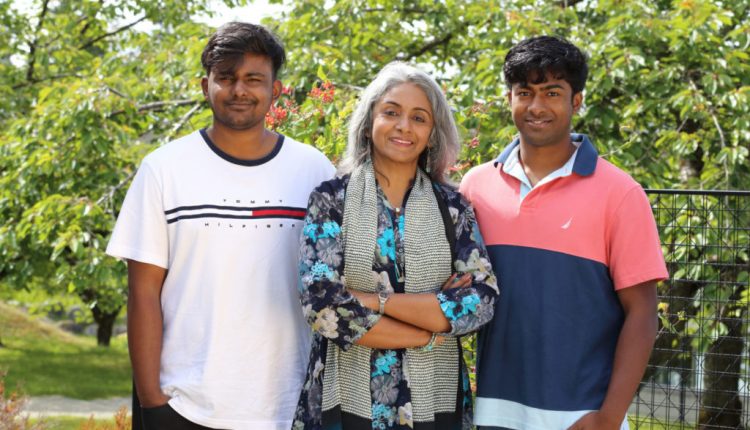 From social work to university leadership, Sobhana Jaya-Madhavan’s career has been defined by a positive outlook, building relationships — and a little bit of adventure

Sobhana Jaya-Madhavan likes to call herself an optimist.

Chatting in a coffee shop at Simon Fraser University in Burnaby, B.C., Jaya-Madhavan speaks candidly about life, work and her immigration journey to Canada — all of which has led her to her current position as the university’s associate vice-president of external relations.

“Life will always have ups and downs, irrespective if you move to a foreign country or not,” she says. “And I’m an optimist by nature. So, if there’s a problem, there must be a solution. It’s up to each of us to get up, roll up our sleeves and get to work.”

And that’s exactly what she did.

After landing in Canada with her then husband, Jaya-Madhavan had no luck in finding work in her field of social work. So, she did what she had to do: she deleted the master’s degree she earned in India off her resumé and went to a hiring fair at GM Place (now Rogers Arena).

“When we landed here, I presumed I wouldn’t have any problems landing a job as a counsellor, community development worker or social worker. But none of my early [job] applications even got a response. I was shocked and very, very disheartened to say the least,” she admits. “So, I realized I should try to forget about trying to get the perfect social worker job, and just get a job.”

However, when she applied for an entry-level job at the stadium hiring fair, she was told she was overqualified. “I was very blunt and I said, ‘It’s been several weeks since I arrived in Canada and my savings are running out. I am willing to do any job.’”

They hired her as an usher. “And that was my first paid Canadian job — a minimum-wage job,” she says.

While she admits it hurt her self-esteem, she held onto her optimism.

As Jaya-Madhavan sips from her cup of hot tea and nibbles on a savoury scone, she starts to delve into her past, sharing more of her early story and how it’s shaped the positive, confident woman she is today.

From Malaysia to India and Canada

Born in Malaysia to Indian parents, Jaya-Madhavan says she was a tomboy, who wore jeans and rode motorbikes in her small town in Kerala, India. “I was always a bit of a risk-taker,” she says. “People were very critical of my parents for letting me be so independent. They were ahead of their time. My father was a feminist and made me feel like I could do anything, so did my mum.”

At five years old, she was sent to a convent boarding school in southern India. “My parents loved the idea of me pursuing university, and had the forethought and vision to know that I should have a strong English education,” she says.

She studied and worked hard, eventually completing a master’s degree in social work and moving back to Malaysia in 1991. “But I was disappointed to find out that my master’s degree from India was not going to get me a social work job there,” says Jaya-Madhavan, who also didn’t speak fluent Malay.

Her career took a turn into research and publishing for an English-speaking company. “It was interesting work, but in terms of a career, you can’t get much farther from social work than that,” says Jaya-Madhavan, who today still likes to dabble in writing and publishing.

Working as a stadium usher in Vancouver, Jaya-Madhavan worried about what the future held for her here. She didn’t want to give up on her dreams of social work. So, on the advice of a settlement agency, she found volunteer work at a senior’s centre in Coquitlam. That “Canadian experience” then helped her land a job as an employment counsellor with Coast Mental Health Foundation.

“Because of my difficulties in landing a job, I decided to keep both,” she says, with a chuckle. “My day job was my employment counselling job, and I loved it. And, in the evening, I’d put on my fancy uniform and dash off to GM Place.”

She would come home at midnight, exhausted, but “being a sort of an optimistic person, a fighter, I decided to embrace the experience. I absolutely loved, loved Vancouver. And, despite the culture shock, I knew I was going to be happy here.”

When an opportunity came up to interview for one of 300 new social worker positions with the Ministry of Children and Family Development, Jaya-Madhavan eagerly applied.

A career in social work

At the interview, she faced a hiring panel asking her questions related to child welfare in B.C. that she couldn’t answer. But when they asked her to do a role play, the panel saw something special in her approach. They hired her as a front-line child protection worker based in Surrey.

“They looked at what I had to offer, rather than what I didn’t say right,” she says. “It changed my life and gave me a 20-year public service career. From a child protection worker, I moved all the way up to executive director.”

Her career included a gutsy stint as a child-welfare team leader in the beautiful but isolated Haida Gwaii — while she was herself a new mom to two boys, Prabhanj and Niranj.

“It was the best career decision I made. It gave me an opportunity to be immersed in Aboriginal child welfare and work with the Haida to change things fundamentally,” she says. “It was a life-changing experience.”

With her own children getting older, Jaya-Madhavan next moved to Victoria, to work at the ministry’s administrative headquarters. “That was the dream job. And it was an amazing 10+ years there,” she says, crediting her mentors within B.C. government in helping her rise to senior positions. Her mentors and colleagues also nominated her for the B.C. Medal of Good Citizenship. She eventually served as the first executive director for B.C.’s Provincial Office of Domestic Violence.

In these senior positions, her focus shifted to management and leadership, and building relationships between the provincial government and other institutions, communities and business. “I worked closely with them to build a bridge to government, to strengthen relationships, and to share knowledge and skills,” says Jaya-Madhavan.

It was this skill in building relationships that has led her to her current position at SFU, where she works to strengthen the university’s relationships with community partners, business leaders, governments, media and other institutions.

Jaya-Madhavan actually got the job after a two-year sojourn back to India to help take care of her mother after her dad passed away. Upon arriving in Canada this time around, Jaya-Madhavan, now divorced, had no problems in re-establishing her career. In fact, she received two job offers — one back in Victoria with the provincial government, and the other at the university.

Always up for a new adventure, Jaya-Madhavan accepted the job at SFU, where her oldest son now studies and the youngest plans to attend after high school.

“I’m relatively new to SFU,” she says, “but I’m embracing it, learning lots and looking forward to what lies ahead.”