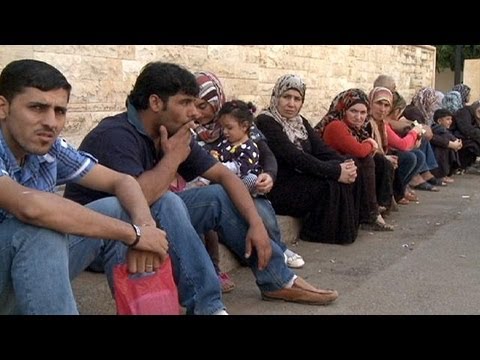 The plight of Syrian refugees who flee to Lebanon – reporter

euronews, the most watched news channel in Europe
Subscribe for your daily dose of international news, curated and explained:
Euronews is available in 13 other languages:

Every day hundreds of refugees arrive at the gates of the High Commissioner for Refugees of the United Nations in Beirut.

While the conflict is confined to their country, the Syrians keep coming to Lebanon to seek refuge. Officially, they are already more than 760,000 who have to be registered or in the process of being registered with UNHCR.

The Lebanese government believes the number of Syrian refugees is more than a million in a country of 4.5 million people. An appeal for funds to the international community has had only a limited response.

“We register between 11,000 and 15,000 every week. So the numbers continue, they keep a pace. But our appeal is only 27 percent funded. So we have to make very tragic choices every day between competing priorities. So we need a lot more funds. Both to help the refugees, but also to help the hosting communities that are bearing a disproportionate burden here in Lebanon,” explained Ninette Kelley, UNHCR representative in Lebanon

The European Union is one of the leading providers of assistance to Syrian refugees, but the funds are far from covering all their needs.

The Bekaa Valley, the main point of entry into the country for Syrians.About twenty kilometres from the Syrian border is the town of Arsal where there is a clinic run by the charity Médecins sans frontières. It provides free primary health care and reproductive health services.

It is an alternative to the Lebanese health services which are too expensive for refugees, whose medical expenses are only partially supported by the High Commissioner for Refugees. The clinic is always full.

Rabih Kbar is a doctor in the MSF clinic: “Every day we see new faces, they are all new patients. In the past six months I think the numbers have doubled,” he said.

While some have found shelter among the Lebanese people, many are forced to live in buildings under construction, derelict buildings, or makeshift camps.

Shamiyeh arrived in June with her four children. She dreads the approach of winter.

“We lack everything here. The most urgent thing is blankets for the children. They are cold and sick all the time and are taken regularly to the doctor,” she pointed out.

Shamiyeh also fears the spectre of war, which killed her husband and left its legacy on one of her children who was wounded in the head.

She does not feel safe in Arsal, which has already come under fire from the Syrian army.

“We fear that something will happen and we will be forced to flee again. We fear that the chaos might come here and we will targeted by bombs from the other side,” she continued.

Several members of the Free Syrian Army who were all were injured during the offensive by troops loyal to President Bashar al-Assad, against the city of Qussair, near the Lebanese border in June talked about their injuries.

“Look ,” said Faycal pointing out marks on his arm “the bullet entered through here and then exited there.”

Razi showed his scars from the conflict: “Look at me, look at my arms, splinters of shells everywhere and yet we continue to resist”

“Even children, if they catch them, they massacre them.,” said Ahmed.

“The crisis has been going on for three years. We want a decision to be taken. All states are plotting against us. If they wanted to make a decision, they could do it in an hour,” added Razi.

“The United States can do everything,” said Faycal while Razi opined: “All countries have disappointed us. All the meetings, speeches it’s all lies. We call on all countries of the world to support us by giving us weapons, nothing else. The rest is up to us.”

The refugee camps at Arsal also act as a rear base for the rebels, who come to relax and visit with their families before secretly crossing the border again to fight. These men insist the international community should do more to help the refugees.

Khaled has been at the camp since he lost a foot in battle. The Free Syrian Army, he said is determined to continue its fight against the the regime of Bashar al-Assad.

What is key Pathway for Immigration to Canada from India?