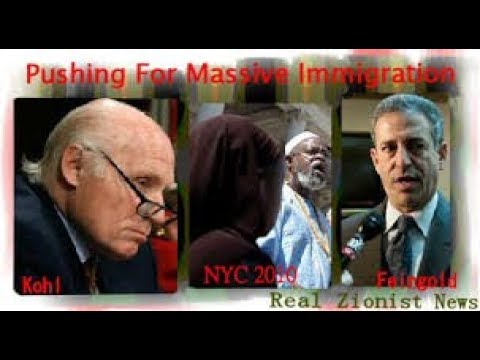 THE ZIONIST AGENDA BEHIND THE REFUGEE CRISIS

THE AGENDA BEHIND THE REFUGEE CRISIS
I’ll preface my remarks by stressing I am not “against immigration.” Most people are immigrants. Most North Americans are descended from immigrants. Any sovereign nation has the right to accept immigrants in accordance with its own laws. If a country’s labor force is seriously short of, say, engineers, it would do well to welcome foreign engineers.

For the illuminist/Zionist banker oligarchy, however, “immigration” has a different purpose and meaning. In Truth the immigration now is for another off their Evil agenda –

Recent years have seen huge pushes to relax Canadian and US – immigration laws. Trudeau was not the First Crime Minster or even going back to Zionist Puppet President George W. Bush was criticized for being notoriously weak on restricting immigration; in 2007 he even joined forces with liberal Democratic Senator Ted Kennedy to create a bill that would have naturalized all illegal immigrants.

Immigration is integral to the Zionists globalist plan. The European Union, for example, encourages free movement within member states. Why? Notice that nations are becoming harder to characterize. Britain had only 10,700 Indians and Pakistanis in 1955; by 2001 that figure had risen to over 1.8 million. France today has over five million Muslims, most of them immigrants from its former North African colonies; they constitute a state within a state – as witnessed by the rash of violence and fires in 2005 that French police couldn’t contain.

The Zionists globalist plan encourages such situations because if you confuse national identity, you weaken national sovereignty. When Africans Muslims come to France, they usually don’t consider themselves Frenchmen – and ethnically they aren’t. A country not unified by a distinct identity is far easier to strip of sovereignty because the subjects themselves feel little allegiance to country, flag, and each other. “Multiculturalism” is politically correct today, but its purpose is to fragmentize nations. Plain Terms destroy a NATION

“Divide and conquer,” of course, is a stock-in-trade tactic of the Zionists globalist plan NWO. But the recent push for Western nations to accept massive numbers of Middle East refugees is raising the agenda bar to a new level, with unprecedented implications..

• The current immigration crisis was created by the Zionists globalist plan. The United States is still fighting in Afghanistan, even though our alleged reason for going there was Afghanistan’s refusal to give us Bin Laden – long dead, even by the official narrative.

The US/NATO have fought a war in Iraq for a decade over weapons of mass destruction that even the Bush administration eventually admitted didn’t exist.

And when Zionist Puppet President Obama couldn’t gain public support for war on Syria over the false claim that Assad used sarin gas on his own people, war on Syria was wangled anyway, through staged beheading videos and switching the professed enemy from Assad to ISIS – i.e., the very forces we had trained and equipped to fight Assad. (Israel Secret Intelligence Services) for those whom still learning who MOSSAD is.

For those who still don’t know it, the Pentagon already had a plan in 2001 to war against seven Middle Eastern/North African countries, including Iraq, Libya and Syria, as was revealed by General Wesley Clark:

Now how do we end the Zionist Agenda and hold them accountable that is what we all need to focus ON!

HOW TO Stop them – No use waiting your time GMOs. Chem-trails, Abortion, MONSANTO,

Go for the Juggler, Destroy the greatest enemy we all face, and surprise after they are locked up and imprisoned -all the other issues will go away — because they created all these Evil Satanic problems

Lets Sink their Ship once and for all — the rest will workout fine as soon as these Psychopaths are Locked up.

ChemCareers 2018 A career in Regulatory Affairs