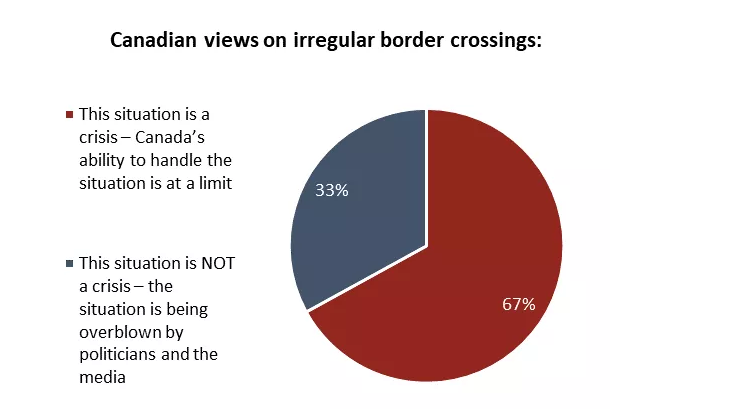 Two-thirds of Canadians believe irregular migration into the country has reached a crisis point, according to a new Angus Reid poll.

And about the same number (65 per cent) are of the view that Canada has received “too many” irregular crossers for the country to handle.

The phenomenon of people walking across unguarded sections of the border from the United States to claim asylum in Canada has been in the news since early 2017, when U.S. President Donald Trump announced the first version of his travel ban, and border towns in Quebec and Manitoba began seeing an influx of asylum seekers in their communities.

However, when asked to estimate how many people have crossed outside an official point of entry since 2017, almost half of Canadians overestimated the number at more than 50,000. In actuality, the number of people who have crossed this way in that time frame, according to government statistics, is more than 31,000.

Is Canada too generous to irregular border crossers?

Six-in-10 (58 per cent) say Canada is “too generous” to those crossing the border irregularly. This is a slight increase since the last time Angus Reid asked this question last year (when it was 53 per cent).

How to Get Canada immigration services?